Gate of Glory extrados in Santiago de Compostela Cathedral is crowded by statues bearing different kinds of stringed instruments. At the very top of the gate two of them are playing a beautifully carved and decorated instrument, the so calledOrganistrum.

This curious object has been largely studied and several reconstructions have been proposed and carried out by scholars and luthiers during the past 40 years, nevertheless some aspects are still uncertain, such as its symbolic significance and its peculiar musical role.

Let’s start considering its special location.The statues of the extrados represent the 24 elders of Apocalypse. They can be symbols of Time (24), Music (musical instruments) and Divine symphony (they are heavenly creatures) too.

The two performers at the top are very close to Christ’s head, position as usual occupied by angels. If we compare them to the other musicians we observe they look to be the only two actually playing and they are playing the most complex instrument of all. The idea that it could be given a deeper symbolic significance is strengthened by closer observation of its features. A revolving object, the wheel, creates the sound from strings stretched over a sound box made of two equal circles, to which an unusual keyboard is added, equipped with 11 keys, so that the octave is divided into 12 parts.

All this is strange enough and absolutely unique, in XII century atleast !, and we need referring to any kind of theological, philosophical, mathematical and musical theory of the age to give a reasonable interpretation of it. Medieval Latin Platonism, for example, mainly related to Chartres cathedral school, well connected with Paris and Santiago, brings to us interesting suggestions.

Platonists thought that at the beginning of creation, making the World Soul, Demiurgos was dealing with three abstract elements: Being, Sameness and Difference. Establishing the right proportions among sameness and difference, he gave the World Soul the shape of two circles one inside the other and put them into the material World, thus creating both the Sphere of fixed stars and the plane of planetary orbits. Circular motions of planets and stars were thus connected in perfect harmony, like the strings of a well tuned Lyre or the pipes of a well cut Pan flute[1].This set-up is reflected in our instrument.

A circular sound box, theCircle of Sameness, contains the wheel , that represents planetary motion: the Circle of Difference. This is the origin: the invisible World Soul. Thenanother circle is added, the visible world, Cosmos, with its charming beauty. At lastwe find the keyboard, with 11 keys dividing the octave in parts, the symbol of human mind, which divides and measures in order to understand Natural phenomena. Therefore, the widespread philosophical principle “Veritas est adaequatio intellectus et rei “ (translation: truth is an adjustement between intellect and things) is well represented here, as we can observe that the vibrating string-length (rectilinear thought) is equal to the circumference of each circle of the sound box (Nature and abstract world).

7 :: Diagram of the Seasons

This figure recalls diagrams of the seasons frequently drawn in glosses of IX-XII century astronomical manuscripts or even more elaborated drawings.The main goal of any scholar was to calculate accurately the length of each season in order to obtain an exact and affordable calendar to establish with great accuracy both the dates of Christian feasts and the right hours for prayer in monasteries[2].

Finally, KEYBOARD LID decoration, unique among all other decorations sculpted in the Gate, shows a rare pattern, which had been popular in some areas around the Alps and in Ireland between IX and XI centuries, rather neglected in the XII[3].

Each knot of the interlace corresponds precisely to one key of the 11keys protruding out of the rectangular box. This division in fact is the most puzzling feature of all, as nobody could justify the introduction of a chromatic scale in XII century, when only strict diatonism was allowed. But we discovered that, curiously enough, both the unusual decoration and the division of the octave in 12 semitones can be referred to diagrams of planetary latitudes, related to musical scales as well, in astronomical manuscripts of the age.

Such diagrams were intended to represent planetary latitudes across the zodiacal band, divided vertically in 12 degrees. As usual the horizontal line of these grids was divided in 30 parts, but since XI century we often find 12 in order to signify the 12 zodiacal signs. The Sun and Saturn were given a serpentine path within the two middle degrees of the zodiac, Jupiter had three degrees, Mars four, Mercury eight, the Moon covered the zodiacal band with its 12 degrees of latitude. Venus was assigned a latitude of 14 degrees, one degree beyond the zodiac on each side. 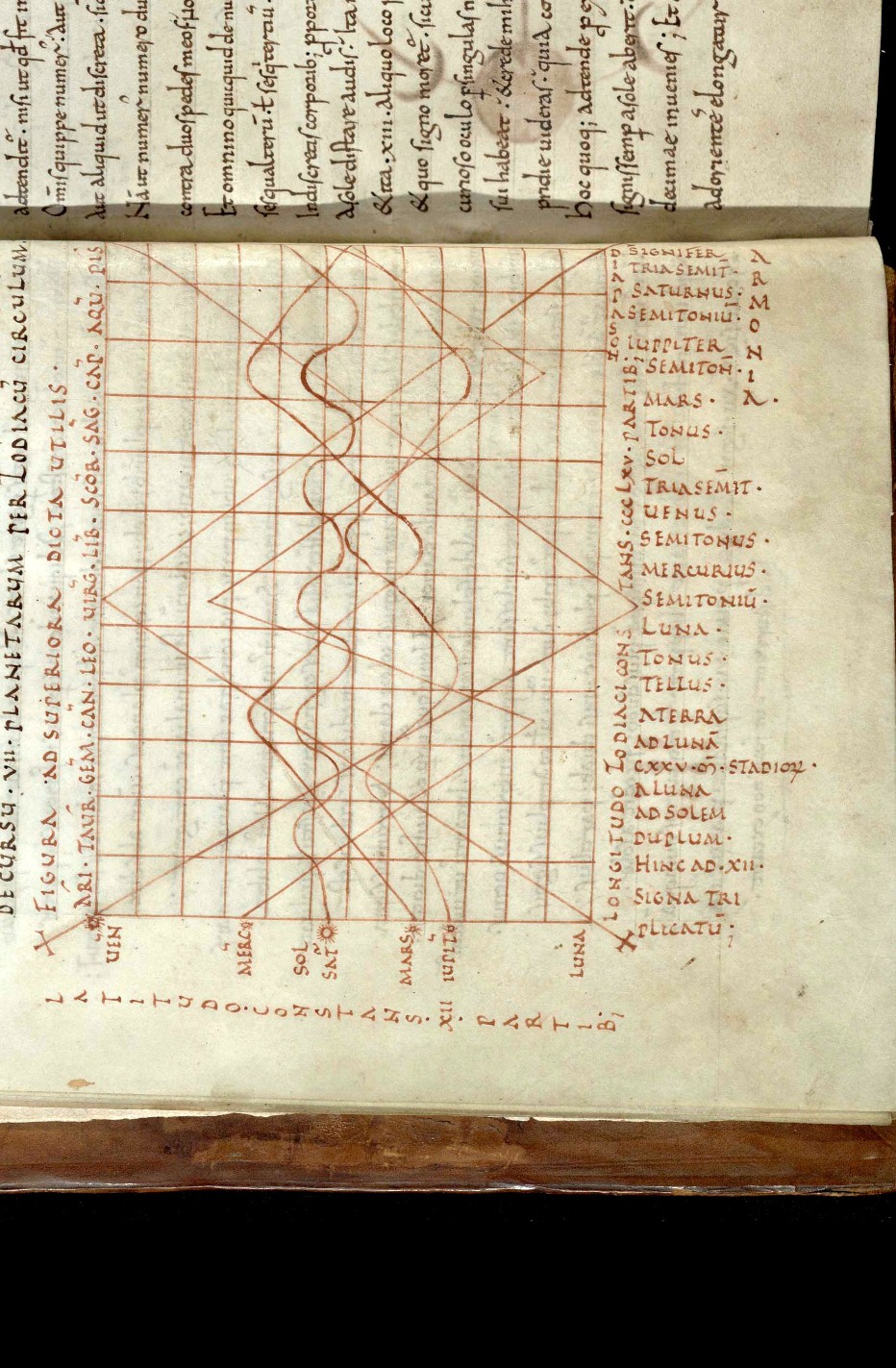 Then, in a manuscript by Abbo de Fleury (c 940-1004) we find a horizontal column list of the Plinian intervals between planetary orbits attached to planetary latitudes grid[4]. Whether 14 semitones can be counted in total, the musical octave spanning from Moon to tha Stars is divided into 12 semitones (semitone being the unit of measurement of the scale, clearly enough).Thus, our XII century chromatic scale shouldn’t be considered as a scandal any longer! Besides, experimenting with our special keyboard with keys ranging about two full chromatic octaves demonstrates that this arrangement fits quite well XII century two voices polyphonic music.

For these reasons we feel the name of Symphonia or Symphonia magna or Symphonia caelestis would be more appropriate for this instrument than the usual, uncertain and rather mocking name of Organistrum.

Its representationin Santiago could have been an exclusive message for a restricted group of scholars capable of understanding the cosmological and musical implications of a non-traditional object that had been invented of course by monks  trained in the liberal arts of Quadrivium.